Personally, I’m not a huge fan of nostalgia, (it’s not what it used to be etc!), but having said that I will have a quick look over my shoulder now and again to see how we arrived at where we are now…

Back in January 1986, IBM launched the AIX UNIX Operating System which has gone from strength to strength. Today it runs some of the world’s most mission-critical workloads across all industries from the smallest companies to the largest multi-national enterprises.

I started my own personal journey with several other flavours of UNIX in 1992  – and remember being immediately impressed at just how easy IBM AIX was to manage, yet it was packed with additional features ‘as standard’ that its competitors simply didn’t have.

These features are what still separates AIX from the competition and with 35 years of development and innovation, it is no surprise that today it is the world’s leading UNIX operating system delivering performance, scale, security, resilience, and real business value!

Below is a summary of just some of the key innovations included over the years – sometimes easily taken for granted, but which help make AIX stand head and shoulders above the rest. 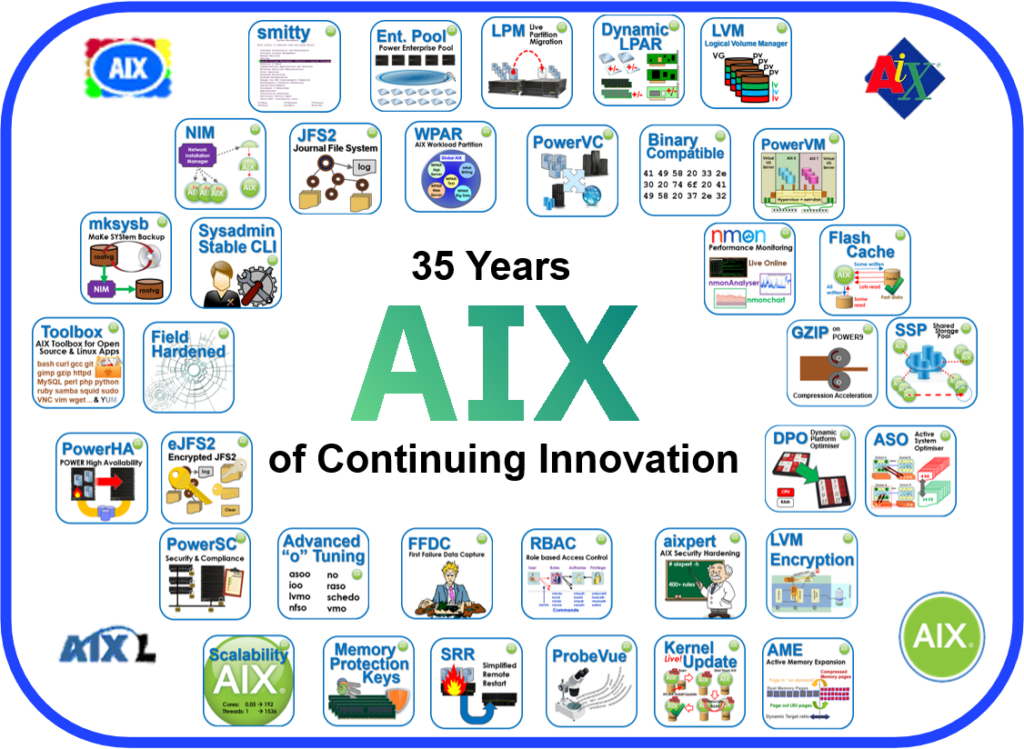 As you can see there is a definite trend towards ‘continuous computing’ with little or no downtime for critical applications and AIX is at the heart of this approach.

Further enhancements are coming in AIX 7.3 later this year as well as including built-in optimisation ready for the latest POWER10 CPU technology.

There is an ongoing commitment by IBM to continue innovating and developing the AIX operating system with a very long and interesting roadmap – placing it right at the heart of business transformation.

How does IBM AIX fit with Application Modernisation and Business Transformation?

One of the integral stories of AIX is the server platform it runs on – a unified, multi-operating system environment with exceptional features: the IBM Power System.

These servers range in specification to suit a wide range of workload requirements from ‘Scale Out’ servers to very large ‘Scale Up’ servers – all with the same management tools and requiring the same effort to manage from entry-level to the top-end!

Workloads running on these servers can be deployed in a variety of locations including on-premise or in public clouds, private clouds, or hybrid cloud environments.

Back to Application Modernisation with AIX…

Today there is a building trend for ISVs to develop applications and front-end ‘Systems of Engagement’ applications as container-based microservices as opposed to traditional monolithic code.

There are many advantages to this development approach. True cloud-native applications can be created and deployed efficiently, and scaled up or down rapidly, with new code being released seamlessly under this DevOps model for a variety of cloud destinations.

Containers will typically be run as Docker images within a Kubernetes cluster – such as the Red Hat OpenShift Containerisation Platform.

This can run on a variety of platforms and clouds but is ideally suited to running on IBM Power Systems for several reasons:

IBM Power Systems are ideal for modern workloads such as Artificial Intelligence due to unique technologies that make creating and deploying Machine and Deep Learning models extremely efficient.

It is more likely perhaps that AI models are created on GPU-accelerated Linux platforms, such as the IBM AC922, or maybe within Watson services on the cloud. However, ‘AIX on Power’ is an ideal platform for running AI inference pipelines and comes with a large Linux Open Source Toolbox to support this.

Coupled with tools such as Python and AI Inference optimised architecture (such as will be included with POWER10) make this the perfect way to infuse applications with embedded AI inference.

There are other modern workloads, such as SAP HANA and SAS Viya, which due to their requirements for exceptional CPU to memory performance are also ideally suited to running on IBM Power Systems, hosted in Linux VMs often alongside AIX or IBM i VMs.

For businesses looking to take advantage of the latest automation capabilities, the good news is that AIX is also ‘Ansible ready’.

There is an ever-growing collection of pre-made Ansible automation modules available for AIX (and IBM i) on the Ansible Galaxy, making it extremely easy to perform automation tasks consistently and easily.

How CSI can help you explore the possibilities

I hope you’ve found this blog insightful and welcome you to get in touch to find out more about the ways CSI can help you explore the possibilities of Application Modernisation and IBM Power Systems.

Mike Leigh is a Technical Architect at CSI